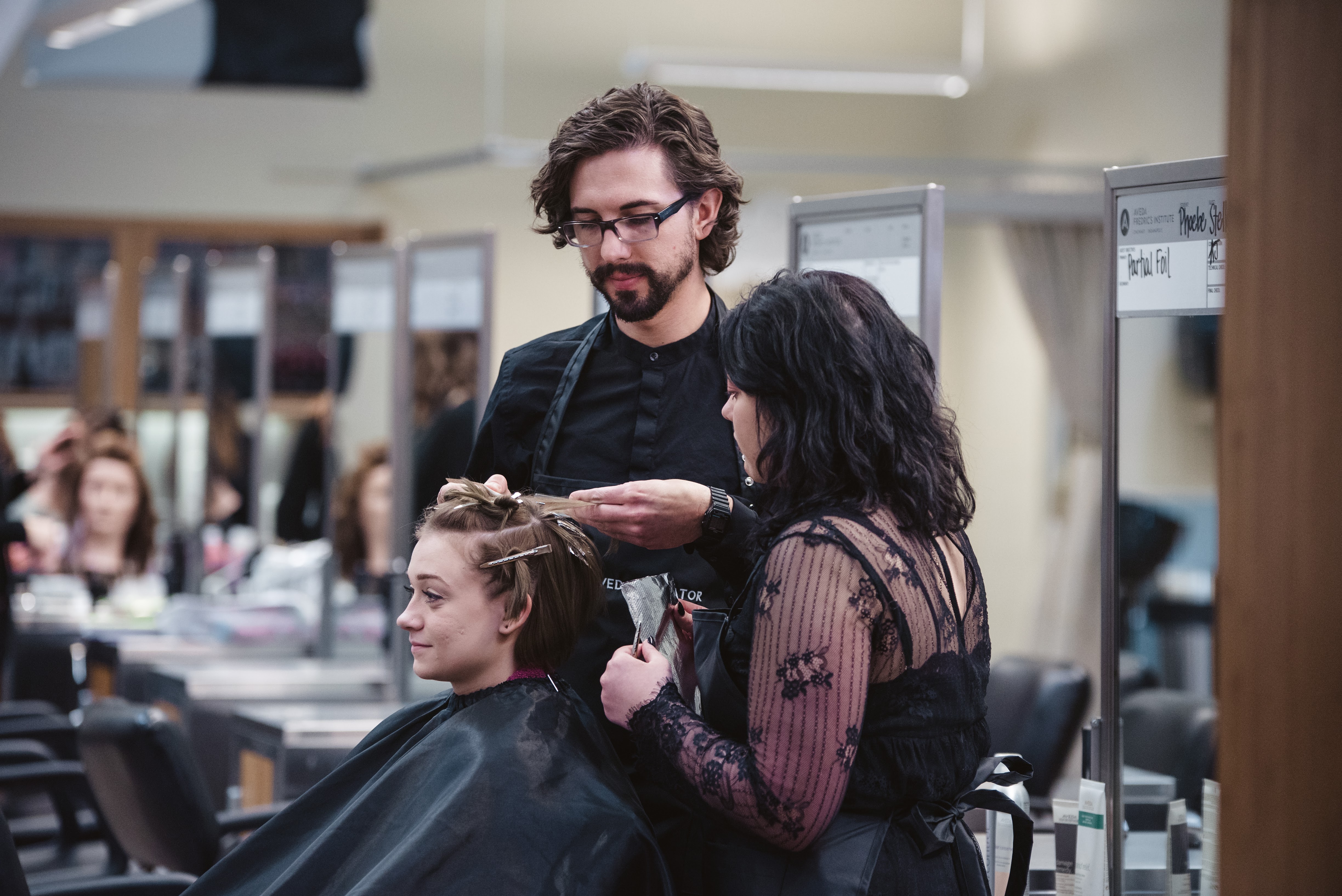 The Aveda Institutes are committed to providing industry-leading education to our students. But more than that, we’re committed a the values put forth by our founder Horst Rechelbacher, to encourage a lifetime of learning, environmental responsibility, and giving back to society.

At our beauty school the salon is the classroom. You will receive invaluable, hands-on experience while providing services to a trendy and diverse clientele. When you graduate you will be prepared for a profitable and fulfilling career in the beauty industry.

Did you know… more than 1.2 million professionals work in personal appearance jobs in the US

The Aveda Institute was founded to create some of the most successful entrepreneurs in hair, skin and nail esthetics, makeup and total body wellness. Our students are educated by accomplished professionals, using innovative curriculums that blend professional techniques with retail and business-building skills.

We understand that a 5-day schedule is difficult to fit into your schedules. Whether you’re balancing work, social or family obligations, our goal is to help you balance your life at school and your life outside of school by our move to a flexible schedule.

The Aveda Institutes have won numerous awards including Modern Salon Magazine’s Excellence in Education Award for Advanced Education, School Culture, and placement. This commitment to excellence extends to our students through the PBA Beacon Awards. We’ve had 122 students honored as winners and honorable mentions since 2005. Additionally, Our students are frequently recognized for the NAHA Student Hairstylist of the Year award.

With more than 6,500 salons/spas in the nation, the Aveda network provides more than just great education; it also provides a multitude of opportunities for employment, worldwide. Our placement rates far exceed the NACCAS (National Accrediting Commission of Cosmetology Arts and Sciences) requirements. This is accomplished by guiding and assisting students to achieve their career goals.

Learn About our Alumni

Aveda is the only salon network committed to environmental leadership. Our institutes have raised over $1 million to various charities around the world.

Learn More About How Aveda Gives Back

Aveda is a brand consumers love, and we’re not just saying so. Aveda was dubbed a “love brand” in the book Trading Up: The New American Luxury. No other brand so uniquely connects fashion, beauty, wellness and art.

The legacy of Horst Rechelbacher extends far beyond the creation of Aveda. a pioneer of holistic beauty, and a champion of environmental responsibility, Horst’s purpose and passion have taken on a momentum of their own as part of a greater global movement toward balance and harmony, both individual and collective.

Born in Austria in 1941 to an herbalist mother and a shoemaker father, Horst began working in the salon across the street at the age of 14. “I was not a good student at all but I was very eager to be something different,” he said. Horst was a natural talent, and by 17 he was working as a stylist at a prestigious salon in Rome, tending to international celebrities. By the young age of 20 he had won the European Hairstyling Championship, which he used as a springboard to tour Europe and the United States. “What is a calling? It’s like almost a fire inside me and it keeps me alive,” he said.

A Lifelong Student With A Lasting Vision

A world-class stylist in his teens, Horst ended up in Minneapolis, Minnesota by accident. Literally. During a stylist competition in 1963, Horst’s car was hit by a drunk driver. He decided to settle in Minneapolis, as a European hairdresser, and opened his own salon, Horst & Friends and then several others, becoming a successful salon entrepreneur in his twenties. In the late sixties, Horst suffered burn out from overwork and recovered thanks to herbal remedies prepared by his mother, as well as to the practice of yoga and meditation. Following a retreat in India in 1970, Horst integrated Ayurveda in his lifestyle and his salon business model. He adopted a holistic thinking, the belief that individual beauty is directly linked to the beauty of the world around us. His were ideas that would revolutionize the beauty industry. “We are the earth,” he said. “We are soil. We are water. We are everything. So go organic if you can. So become a farmer. Grow in your own house. Grow peppermint and make your own tea. Celebrate life.”

Aveda has forged a partnership with Nisarga, and Indian Firm, to source organic ingredients like turmeric and amla.

From The Ancient Art of Ayurveda

In India, he also received the inspiration to create Aveda. Horst gained greater appreciation for the power of wellness to promote balance in mind, body and spirit, the prerequisite to achieving the guest’s beauty goals. He met Shiv Nath Tandon in the ashram Sadhana Mandir in Rishikesh, India with whom he developed his first Clove Shampoo in a kitchen sink in Minneapolis, together with doctors of Ayurveda, Vinod and Kusum Upadhyay. All have continued to work with Aveda since the early 1970s.

Out of this well-timed collaboration, Aveda was born in 1978 with the vision to bring beauty professionals botanical products that would be good for them, their guests, and the Earth and its communities. Horst’s foresight is a testament to how far ahead of his time he was, and although no longer with us his legacy lives on in countless ways, from the signature ritual of a neck and shoulder massage that Aveda salons are known for, to an ecologically-minded way of doing business, one that celebrates companies with a conscience. Most importantly, Horst taught us that: “Every day presents every one of us with the opportunity to create positive effects. Even the simplest, seemingly insignificant choices we make in our daily lives—what to eat, what to wear, what to use on our bodies and in our homes—have a ripple effect that reaches far beyond us personally.”

A Life Of Extraordinary Leadership

Thank you for your interest! We will send information to you shortly.